How it all started, a long, long time ago…

In the late 1980’s, early 90’s in South Ribble, it wasn’t unusual for churches and clergy to find young people knocking on their doors asking for help, not knowing where else to turn to. This was usually late at night and they had nowhere to go and nothing to eat. Wanting to help in a way that would make a difference, a group of local people set up the Leyland Churches Homeless Project. Through the Chaplaincy Support at Runshaw College and the Leyland Clergy Fraternals, support was mustered to recruit families from Leyland Churches to open their doors to young people who were homeless. The accommodation was provided on a Bed and Breakfast type of approach in the homes of volunteers who did this for free.

As the number of hosts and young people on the project grew, in early 1993, the organisation approached South Ribble Borough Council about the growing problem of homelessness. Later that year a conference was held highlighting the issue in South Ribble and resulting in the creation of the KEY Project, a two year initiative to provide housing advice and support to young people. This is still going and it is now called Key Unlocking Futures

SLEAP continued to work in partnership with South Ribble and Key to further develop the available resources for homeless young people. In a visit to the United Reformed Church to recruit volunteers, one member decided more needed to be done. This later resulted in V.A.B. Developments building 6 units of self-contained flats, still known today as The Mill. Alongside this the Church Action on Poverty developed the Rent Guarantee Scheme.

By 1995 the project had grown, with people all over Leyland willing to host and support homeless young people, in their homes for free. This was the year it became a registered charity, with trustees representing a cross-section of churches in Leyland and adopting the name Support in Leyland with Emergency Accommodation for young People – SLEAP. 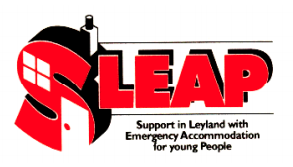 Since then SLEAP grew from an emergency accommodation project in Leyland to, in partnership with South Ribble Borough Council, setting up the first Supported Lodgings Scheme to exist in Lancashire. It was in 1999 that the Supported Lodgings Scheme was launched to cover both South Ribble and Chorley. This enabled young people to be lodgers for longer periods, supported and settled enough to plan for the future and move on successfully when ready. 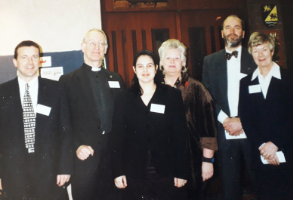 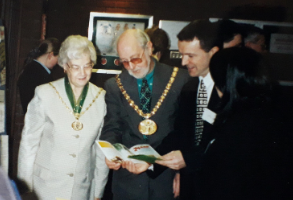 The launch of Supported Lodgings in 1999.

SLEAP continued to adapt, responding to changes in need and resources. In 2013 SLEAP stopped providing emergency accommodation and it continued just as a supported lodgings scheme. In 2015 it expanded to cover Preston and West Lancashire.

Today, SLEAP continues to thrive, responding to local need and always encouraging the local community to get involved.

In 2020 we celebrated 25 years since we became a charity!

SLEAP is open to any young person in need and works with everyone in the community.

Having been set up as a Christian response to homelessness, the involvement from the local churches has been key in the development of our services. Through the years, different local churches have supported SLEAP with either donations, food collections at harvest, with trustees or volunteers, and more importantly, through prayer. All this is part of SLEAP’s history and helps shape our identity.

Our Christian faith inspires the values we choose, the service we provide and the needs we seek to respond to. The Bible challenges us to love with actions and not just with words and to live with hope even in the face of despair. Being a Christian organisation is part of our DNA and this is why we do what we do in the way that we do it.

Here is a small portion from Scripture that inspires and underpins the work of SLEAP:

“… I want a day when you set troubled people free and you take the burdens from their shoulders. I want you to share your food with the hungry. I want you to find the poor who don’t have homes and bring them into your own homes. When you see people who have no clothes, give them your clothes! Don’t hide from your relatives when they need help.” If you do these things, your light will begin to shine like the light of dawn…

SLEAP was set up by local people who were concerned about homeless young people in their community and the lack of services or help. Since then, we have always strived to maintain a community approach to all we do. Our model of accommodation provision is based on individuals and families across the community who are recruited, trained and supported to host and work with our young people.

Volunteers are involved in many different ways across all the services we provide. They are at the heart of the decisions we make and the funding we raise.

SLEAP aims to be a catalyst for action in the local community. We want to bring together those who can help with those who need help.

Check out some examples of how different people and organisations have been getting involved. 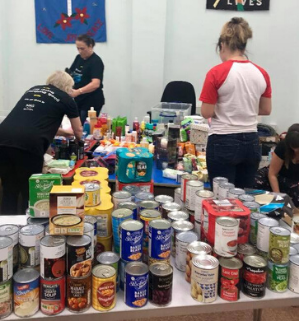 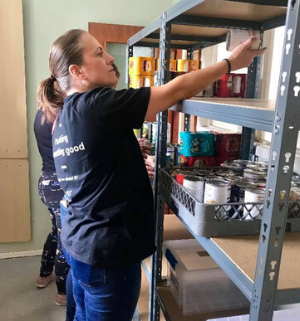 Our food bank stocked up and ready for distribution.

We encourage people to fulfil their potential